This release introduces a ClickOnce installer for easy installation into Outlook. Automatic updates are facilited by the installer as well.

Full documentation on the add-in, including download link, can be found here https://docs.appsfordynamics365.com/iw/uid/outlook-overview

Included in this version is a simplified login process where only the Customer Id is needed, not the entire URL.

Also support for different themes in Outlook (like dark mode) has been implemented. 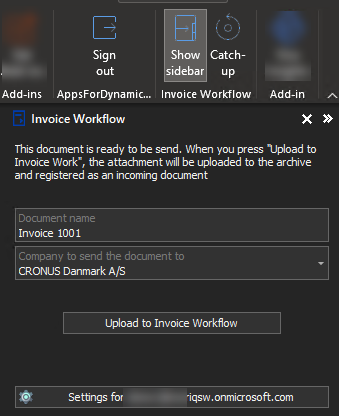 This release makes Invoice Workflow ready for the new OAuth security requirements that Business Central 2022 wave 1 (BC20) will introduce.

To ensure uninterrupted operation of Invoice Workflow, it is very important that you install this upgrade before your Business Central is upgraded to 2022 wave 1.

For details on installing the update, please visit our documentation site here: Docs - upgrade to BC20

This release makes Travel&Expense Management ready for the new OAuth security requirements that Business Central 2022 wave 1 (BC20) will introduce.

To ensure uninterrupted operation of Travel&Expense Management, it is very important that you install this upgrade before your Business Central is upgraded to 2022 wave 1.

For details on installing the update, please visit our documentation site here: Docs - upgrade to BC20

After sliding to send an item, you now have to synchronize with the cloud to upload it. This change is to help users who travel to places where they may not have a connection at all times, and thus could lose track of whether their expenses had been synchronized.
Items that have been sent but have yet to be synchronized will remain visible on the dashboard, indicated with a green bar on the left as well as an icon indicating that a synchronization is in order. These items can also, until the point that they are syncronized, be edited freely.

Expenses that require a transaction will remain visible on the dashboard until a transaction has come through and been matched with the expense. This is done to make it easier to keep track, as well as to encourage saving the receipt in the app early on.

Several changes and optimizations have been made to the login procedure. This results in an easier experience for users, as well as one with fewer issues. For example, you no longer have to input the second part of the tenant in the first step of the login.

The interface for Travel & Expense Management has been enhanced in a number of ways to optimize the user experience. Multiple of these changes have come about as a result of feedback from users from various places, and many still have become clear as we continue to work on refining the solution.
The general focus has been on making the flow as efficient and clear as possible, and providing the user the information they need to utilize this flow without interfering with everyday use.

We have added icons to mileages so mileages, expenses and transactions each have icons. This homogenizes the feel of the dashboard, and makes the items easily distinguished. 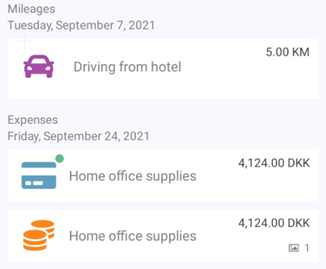 The icon and the numbers that were previously at the top of the dashboard have been removed to simplify the look, as we found that users got little use out of the information displayed. Instead, the synchronization icon has been moved to the top right making it take up much less space of the screen. To synchronize you can use the button in the top right, or simply drag down on the dashboard. If you have gone more than 24 hours without synchronizing, the logo will turn red to indicate that this should be done. In addition, a progress bar has been added to make sure a user can recognize when the synchronization is finished.

Mini guides have been added in multiple places in the app, which can be dismissed permanently. The intent is to introduce users to smart or efficient functions they might otherwise not interact with, or present patterns of use that might otherwise be missed by some. 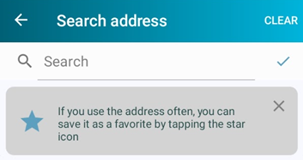 An ‘I lost my receipt’ toggle switch has been added to expenses. To send an expense, an image has to be uploaded, or this switch must be toggled. Optimally the user should take a picture of the receipt just as they receive it, but as this is sometimes not an option, it can get lost.

The slider in the bottom has had the text displayed changed to reflect what will happen when used. When submitting an expense with a credit card that has “Transaction needed to send expense” enabled, the slider will say “Await transaction” instead of “Slide to send”. In addition to this, haptic feedback has been added to the slider.